Home » Climbing » Coming down to the wire!

Coming down to the wire!

As the season nears its close one thing is abundantly clear. In 2014 the IFSC World Cup remains wide open with two men and three women having a realistic chance at taking their respective overall titles.

In the men’s series it has proven to be a battle between the maturing Jan Hojer and the 3 time champion of the World Dmitrii Sharafutdinov.

Coming off his debut win last year Jan had the perfect start to the season picking up victory in Chongqing and maintaining a finals presence all the way to Innsbruck trading victories with Dmitrii. In Innsbruck the first chink in his armor appeared with a 10th place but Dmitrii failed to capitalize with his worst result of the season to that point, finishing 4th.

Jan rebounded in Canada with a strong 2nd place finish (important as Dmitrii skipped the round due to the difficulties he faced securing a Visa) but again at the GoPro Mountain Games in Vail he missed out on finals, a telling blow this time with Dmitrii taking his second victory of the season after Baku.

Now, going into the final two events Dmitrii is on just behind Jan in the overall with Jan on 437 and Dmitrii on 415. Of course Dmitrii doesn’t have to drop his worst result which puts him ahead by 12 points once Jan drops Innsbruck. So with 200 points still on offer its super close!

In the women’s overall its much the same with Britain’s Shauna Coxsey holding a slender lead over Japan’s Akiyo Noguchi and Austria’s Anna Stöhr still in the running as an outside chance (who would’ve thought we’d be saying that after last years stellar season!) 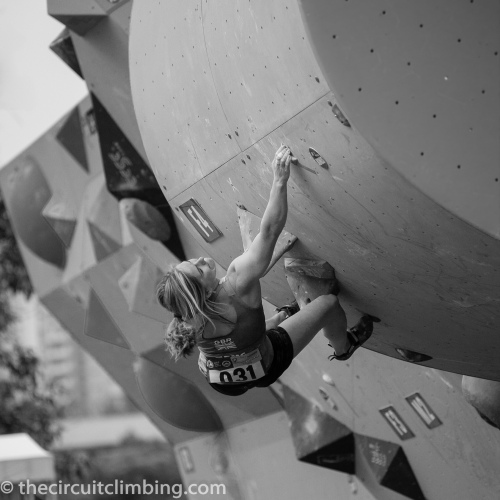 Matched on two wins apiece Shauna narrowly leads Akiyo by 11 points in the current standings but again once you drop their worst results, a 5th for Shauna at Vail and a 4th for Akiyo you’re left with a 15 point difference, Shauna still just ahead of Akiyo with 425 over 410…

With Anna on an adjusted 386 she is 39 points behind Shauna. This means if she was to win the last two events she would take the overall by 1 point, even if Shauna were to finish 2nd in both. So in the women’s, especially considering the strengths of the 3 athletes in question it really is too close to call!

Please provide you guesses for the final men’s and women’s standings (with points) on The Circuit Facebook link to this post. The closest to the final season result wins a copy of the magazine. *Entries close Thursday the 19th of June

By Eddie Fowke in Climbing, World Cup climbing on June 16, 2014.
← That restless state of being