The IFSC Bouldering World Cup series has arrived in Europe for two competitions before jetting off once more to North America.

For many of the athletes this is the start of the season with a far bigger field entered than in either of the two flyaway rounds. Indeed from the start list this could be the biggest field ever at a Bouldering World Cup, in fact any World Cup ever! For those athletes that toured to China and Azerbaijan the return to Europe signifies a welcome return to normality after two weeks of interrupted training schedules and long hours traveling. While I can’t speak for anyone else to get this far has already taken over 65 hours of travel time which is a lot for two weeks!!!

This season so far has seen the consolidation of the top five ladies on the circuit with a significant gap to the chasing group. How these ladies have pulled such a gap on their opposition is unclear but it must certainly be demoralizing for the chasing pack.

Anna Stöhr appears to be climbing as well as ever with victory last weekend in Baku but the weekend before showed how tight it has got with a couple of difficulties in the final seeing her off the podium altogether. It is highly unlikely Anna will be able to emulate last year’s domination with the others so strong right now. 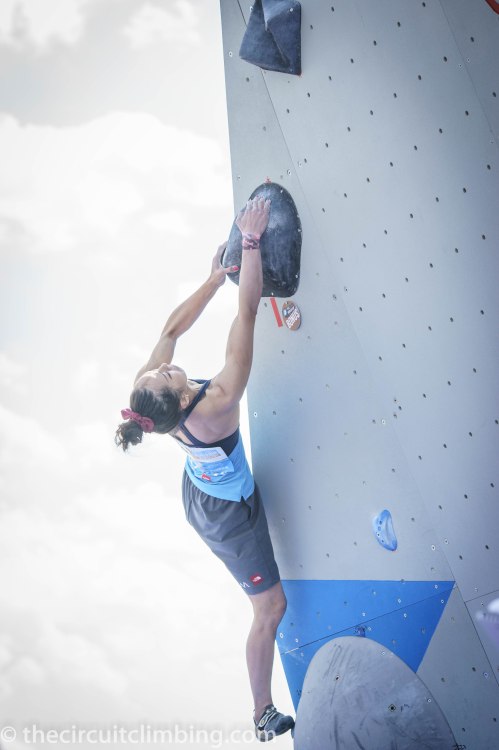 Akiyo Noguhi has seemingly come into the season very fit reaching the podium twice already, her fantastic consistency will be a huge threat to the others in the quest for the overall. Dropping points against a competitor like Akiyo could prove insurmountable. 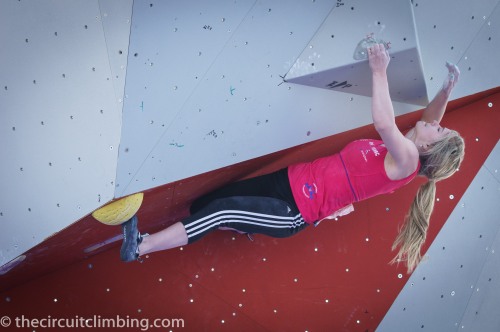 Shauna Coxsey is looking fantastic this season, more composed than in previous years and she’s climbing with a real sense of self-assurance. She should have won last weekend in Baku and needs to take confidence from that performance. I also think representing the supporters who got in and crowd funded the Brits gives an extra sense of meaning to this year’s campaign. 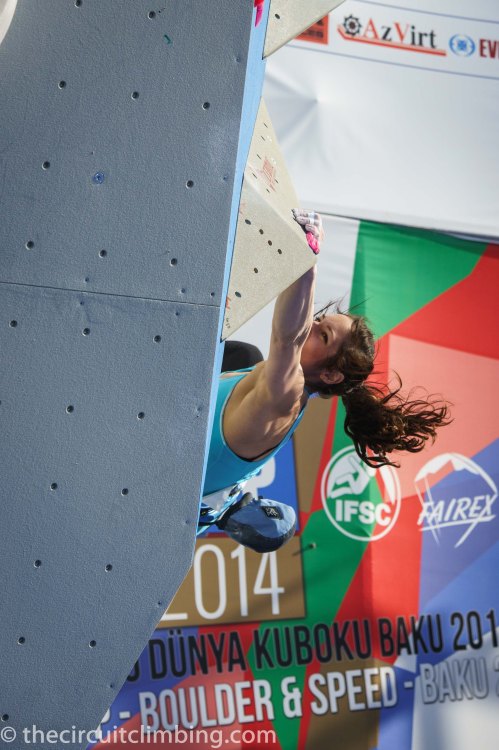 Alex Puccio is another looking stronger than I’ve ever seen her. Indeed seeing her do three one arm pull ups the other day makes me wonder if she is the strongest female boulderer ever? Alex was under the weather last weekend and it’s uncertain if she will be back to 100% for this weekend… Fingers crossed!

Last but by absolutely no means least is Germany’s Juliane Wurm. Coming off a victory in the opening round in Chongqing Jule didn’t have quite the comp see would have wanted in Baku and will be looking to get back on top of the podium this weekend. A change of training situation for Jule appears to be paying dividends with here looking more confident and comfortable than ever before.

Below these ladies are several strong competitors, from Japans Momoka Oda to Slovenia’s Mina Markovic and a host of strong French athletes looking to crack the top six. Based on what we’ve seen so far it’d be a brave guess for that last finals spot but based on her form of the last fortnight I’d say watch out for the young French star Marine Thevenet.

Moving to the men’s field now and no such demarcation appears between the climbers. There are realistically 30 climbers with a chance at making finals meaning some top echelon climbers won’t even make the semifinals let alone the main show!

The standout athletes so far have been Russia’s Dmitrii Sharafutdinov and Germany’s Jan Hojer, both even at the top of the standings with 180 points for the season so far! Close behind them though is a huge pack and that’s before we add the climbers who have waited to the European season like Sean McColl, Thomas Tauporn and Gabriele Moroni.

Dmitrii is looking strong this year, easily the most composed climber in both of the finals this year. However he still has some weaknesses as exposed on the run and jump in Chongqing. When the problems suit him though his mistake free style puts huge pressure on the others. 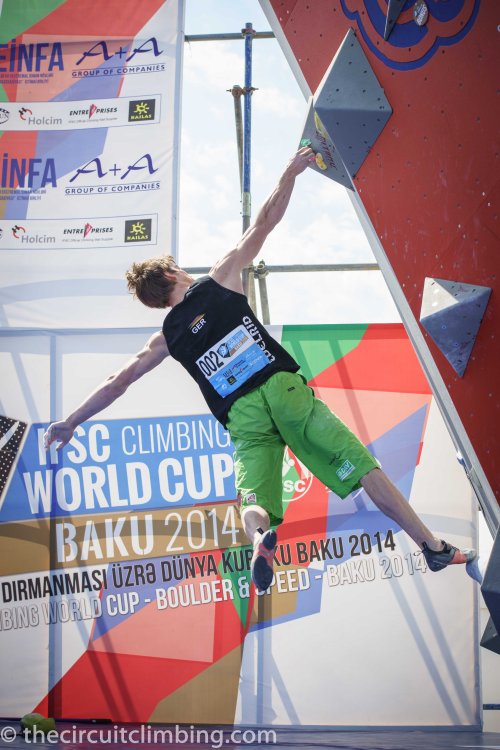 Jan has dropped some weight over the off season and is looked more conditioned than last year. After taking time off the sport completely a while ago to go play basketball he has come back as enthusiastic as ever and clearly ready for a big season! While he may have lacked the consistency of some of the top climbers in previous years Udo seems to have done a great job in his emotional and psychological preparation and we are seeing a more consistent, balanced Jan. 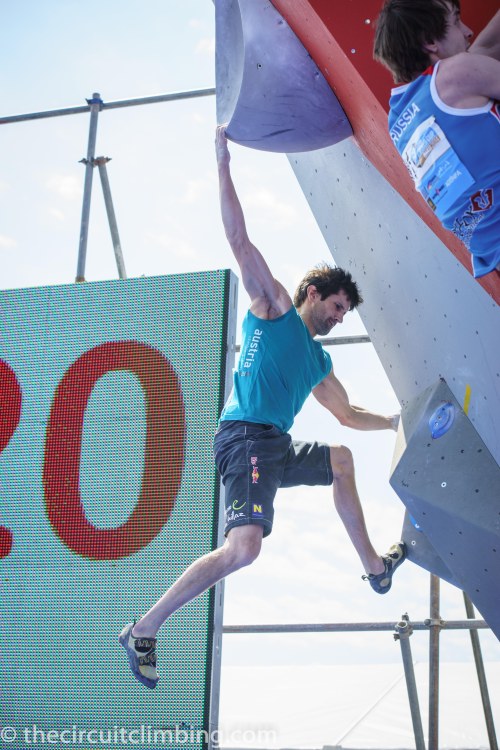 No preview would be complete without mentioning the legend that is Kilian Fischhuber. Coming off a poor event by his standards in Chongqing Kilian bounced back to be just off the podium in Baku. Indeed he was the only athlete that came close on the final problem and that would have secured 2nd for him… Kilian is most likely training towards the World Championships this year but will want a good showing in the European rounds to confirm his place at the top of the sport!

James Kassay of Australia sits third in points currently, just ahead of the mega experienced Jorg Verhoeven. This may come as a surprise to some but as James had acquitted himself well in his limited seasons over the previous two years with no specific training it is no surprise that after some dedicated training for this season he is sitting where he is.

So there’s what we know going into Grindelwald. What we don’t know is the level of those who have been waiting in Europe for the season to come to them. Sean McColl is sounding psyched to be back, Strong Aussie (James training partner quite often this summer) Thomas Farrell will be back in action, as will Italy’s Michael Piccolruaz who looked so impressive in the European Champs in Eindhoven last year.

Check Facebook and the IFSC scoring app for updates through Saturday and enjoy the stream on Sunday!

The Circuit World Cup and Performance Climbing magazine is available now and gives a unique insight into the lives of the world’s best climbers. To keep getting all the competition reports and photos you can support us by purchasing a copy of Issue 1 through  http://www.thecircuitclimbing.com/Buy (worldwide excluding North America) or http://store.madrockclimbing.com/thecircuit.aspx (North America)

Issue 2 is being researched and written currently for release later this year.